** Please be advised that since Uber availabilty in Oak Alley's area is not currently available, it is advised that you find another means of transportation.    Oak Alley Plantation is not responsible for getting you to your next destination if you arrive by Uber.

The historic grounds and exhibits at Oak Alley Plantation reflect the evolution of this National Historic site.

Visitors are encouraged to allow a minimum of 2 hours to explore the grounds and exhibits.

A downloadable map of the historic site can be found below. 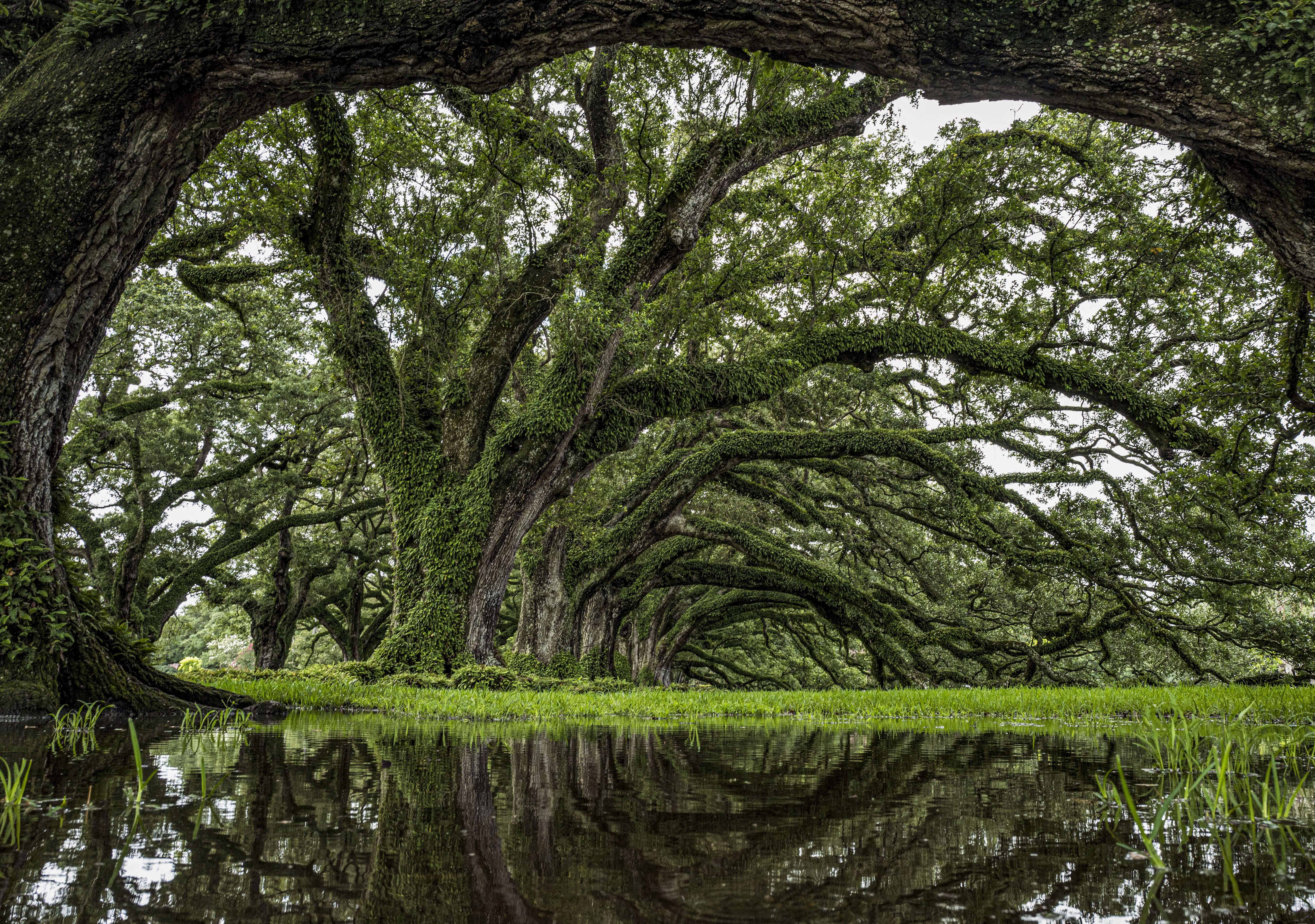 From its 28 Oaks to its open spaces, to its hidden nooks and crannies, Oak Alley’s Landscape tells the story of a plantation in its evolution. Wide pastures stand where a Pecan Grove once thrived. A 1920’s formal garden quietly preserves the remains of a 1830’s kitchen hidden under its turf. As a landscape that speaks truthfully of its past with the parts that remain, it offers visitors an unrestricted opportunity to detach, contemplate and imagine. (Insider tip:  Come early before the crowds) 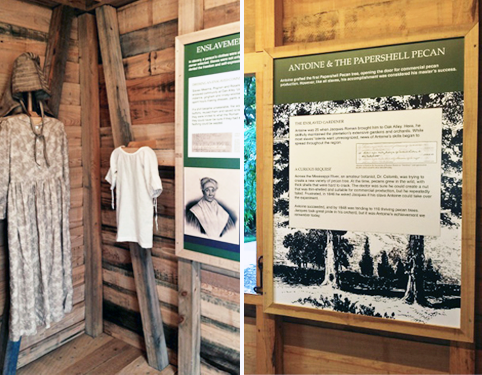 Oak Alley as a sugar plantation was built by and relied on enslaved men, women and children. This self-guided exhibit focuses on some of the individuals who were owned and kept on the plantation, their lives and living conditions. It also includes a look into life after emancipation, as laborers continued to live in the increasingly squalid housing until the 20th century.  The exhibit also serves as one of our Conversation Series locations, where staff offer a variety of talks on all things Oak Alley.

(Insider’s tip: No time restrictions so feel free to allow at least an hour for this exhibit) 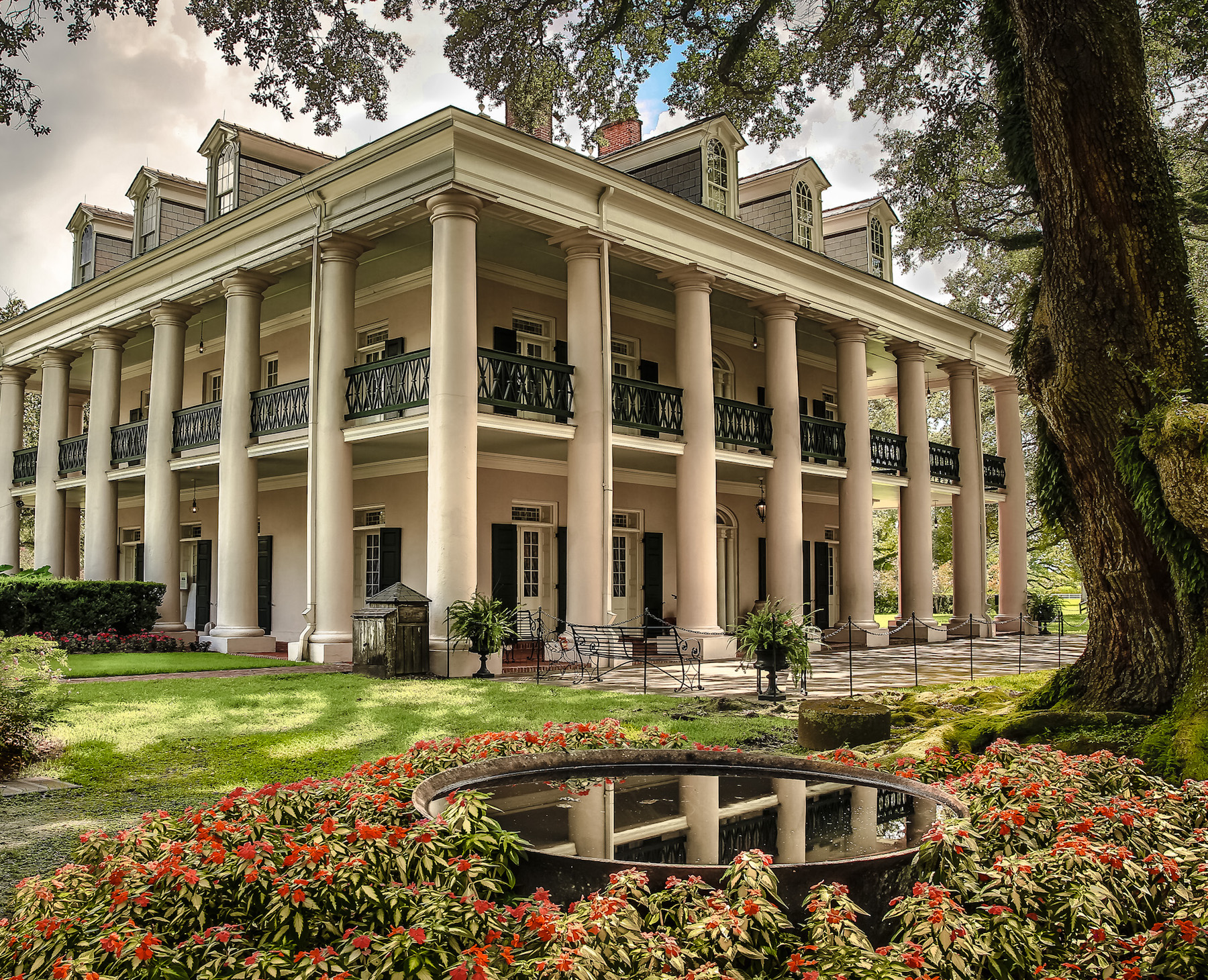 Plantation mansions were called “Big Houses” referencing their relative difference in stature compared to the enslaved dwellings and other outbuildings that made up the sugar plantation complex. The ‘Big House’ at Oak Alley is no exception. Built with success, prestige and power in mind, the Oak Alley ‘Big House’ commands attention.  (Insider’s tip: if a person in your party is unable to climb stairs, be sure to let your interpreter know. The 2nd floor portion of the visit is available on Ipad is available for guests who an not travel to the second floor.  Please also note that while photography is not permitted inside the mansion, visitors are encouraged to take photos on the balcony.)  We also recommend you purchase yoru ticket online, in advance, so secure your tour time for this exhibit. Interior images can be found here. 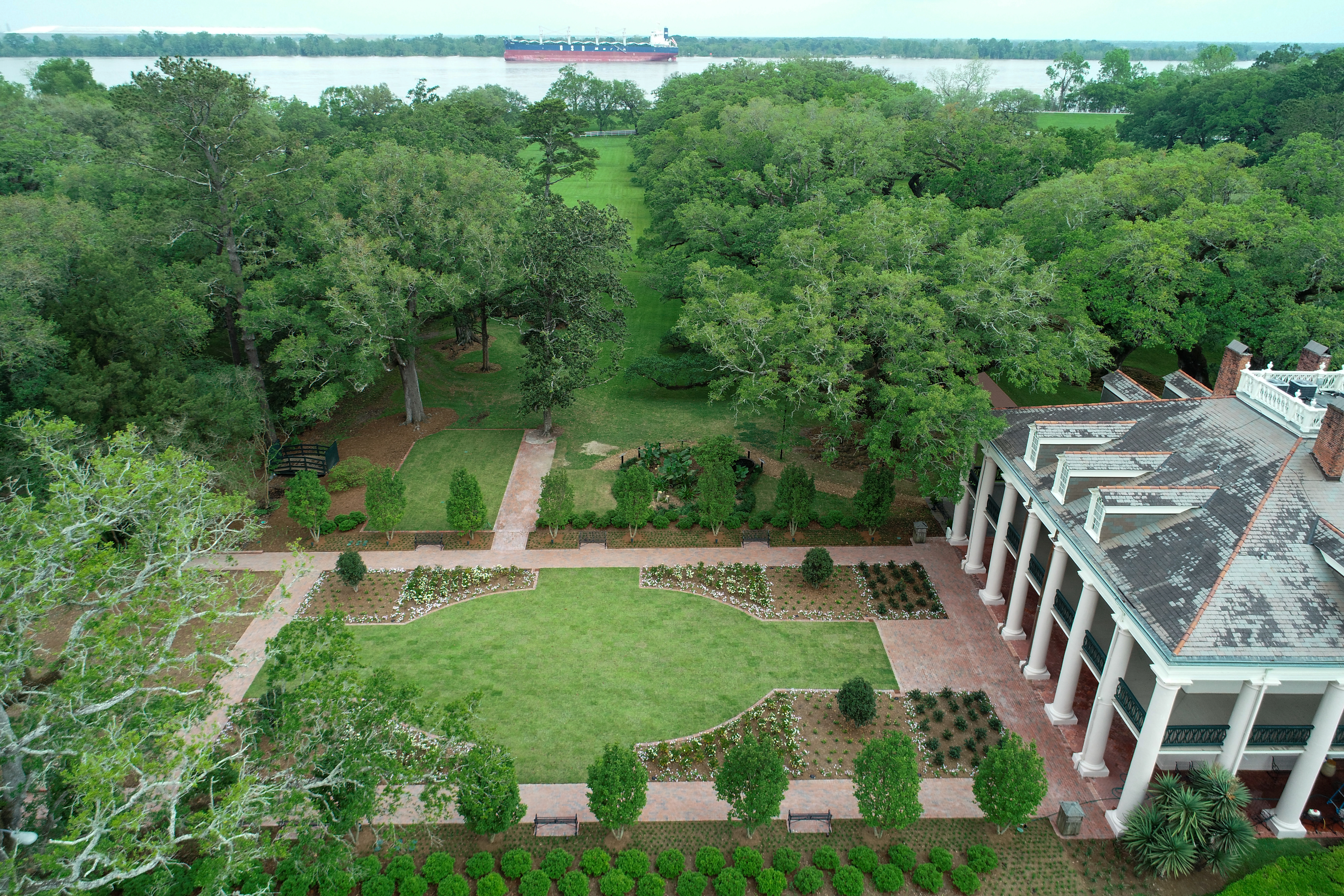 Over time, several gardens and ornamental plantings were established by the many residents of Oak Alley.   The sprawling lawns and open pastures dotted with mature trees, ornamental gardens and agriculture crops have come to define the character of Oak Alley's landscape. Visitors have had the opportunity to witness many of these but most notably the formal gardens and alley of oaks.  Opportunities exist to weave these elements together into a tapestry of history and cultural landscape. 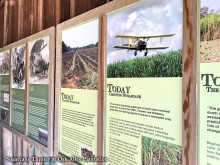 With a 3 dimensional map of the Roman family empire and exhibit detailing how sugarcane was grown and processed—both when Oak Alley was an operating plantation as well as today—this space has lots to offer.
(Insider’s Tip: Visit this exhibit before you reach the mansion, it is packed with stories of how the plantation functioned, as well as just how important slavery was to creating the plantation and the mansion you are about to tour.) 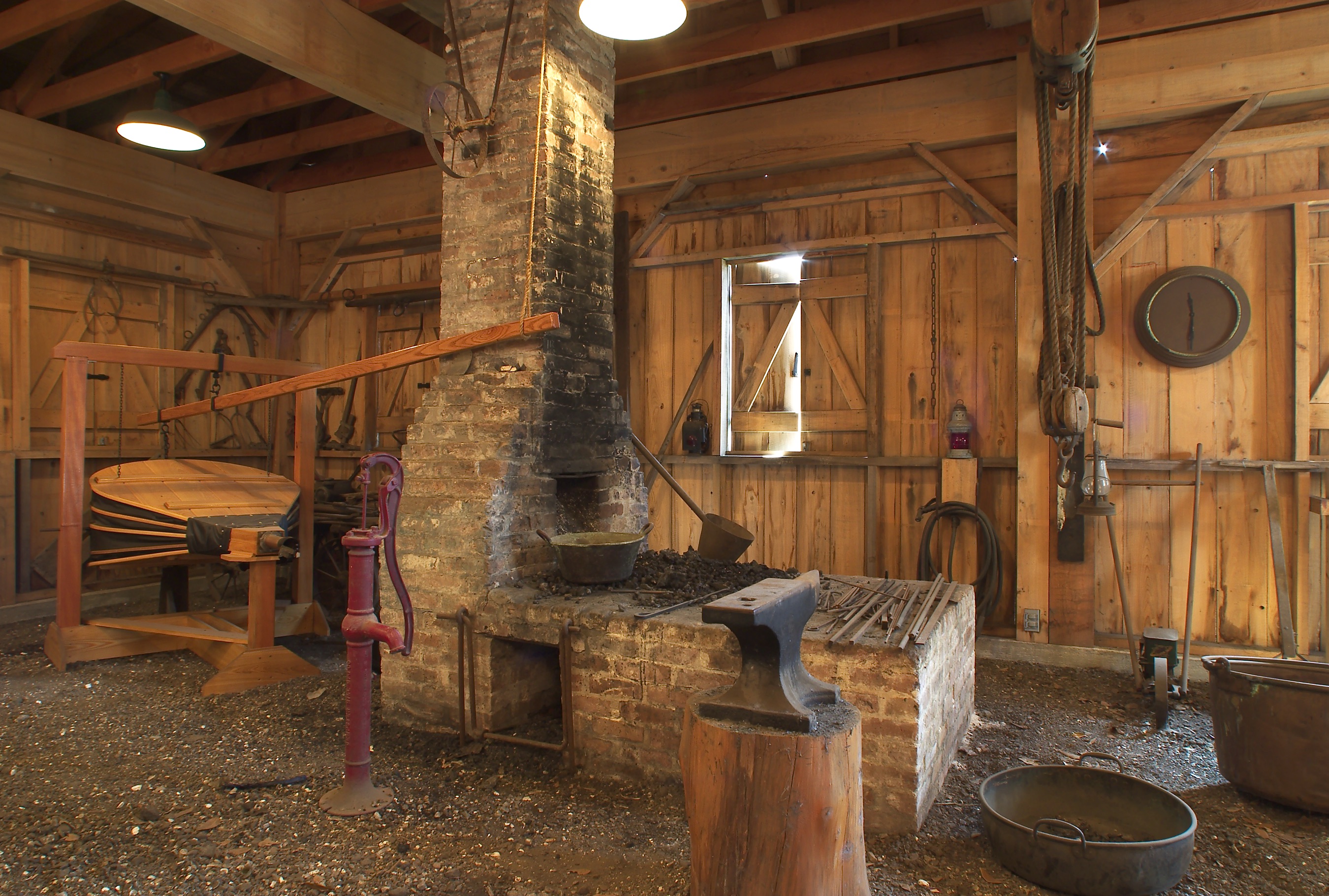 This forge is tribute to the enduring legacy of Louisiana craftsmen and shares the history of forging metalwork on plantations. 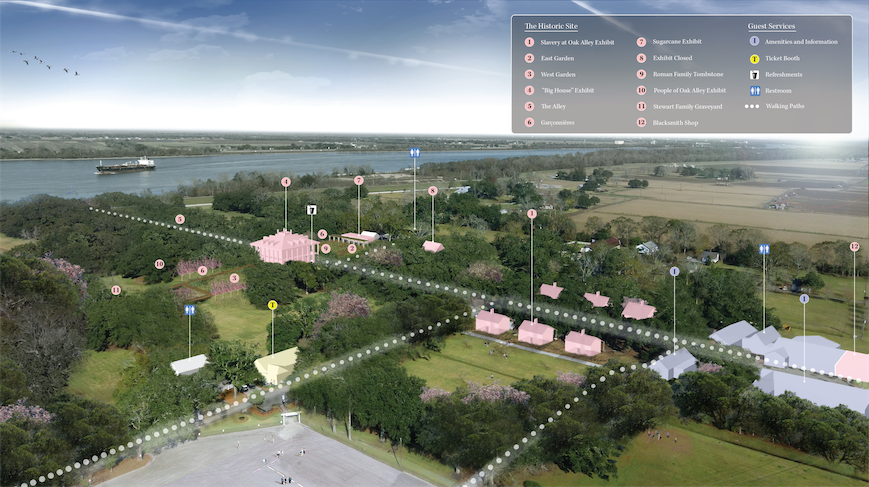 In addition to the exhibits, here are more highlighted points of interest:

Photography is welcomed on the grounds at Oak Alley Plantation, except for the "Big House" exhibit.

Videotaping and video-streaming are prohibited during guided visits.

For safety reasons, the use of "drones" or any aerial photography devices is not permitted.